In my Reconstruction Series I create three nearly identical paintings on paper.  Then these three paintings are cut up into small squares which then are intermixed and glued down on a canvas to form three new paintings.  The parent paintings join and intermix to form daughter paintings.

A simple numerical system is written on the back of each small piece to keep track of them.  I do not look at the painting side of the pieces to form a composition.  Instead I rely on this numerical system to organize the pieces into a pattern or into the absence of a pattern to guide me to a new painting.  By creating a pattern or by avoiding a pattern a deeper truth about the universe is revealed.  To me this speaks to how biology, technology, and culture, which are all three evolving information systems, achieve higher levels of order in a chaotic universe.

"The Burial"  a Self Portrait

The genesis of the Reconstruction Series was born out of obsession.  Certain images attracted me and I wanted to paint them over and over again.  Painting from parent images I would vary the color and look of the paintings.   I wondered what it would look like to cut-up a couple of similar paintings and mix up the pieces to form a new painting from the parts but it wasn’t until my big move to the Big Island that initiated this new adventure in my art.

Leaving my home in the French Quarter, I had to deconstruct my life and reform it in Hawaii.  It was painful taking apart my apartment and studio, but it was exciting reconstructing a new life in a far away land.  The psychology of this process manifested itself in my art.  I began taking apart my paintings and reconstructing them into new ones.  It was painful cutting apart the first paintings but it was exciting to see them form into new paintings. 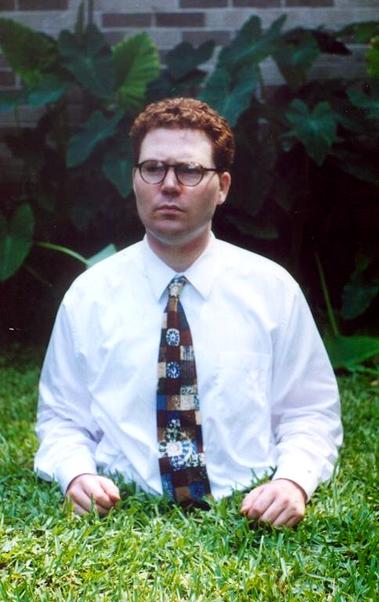